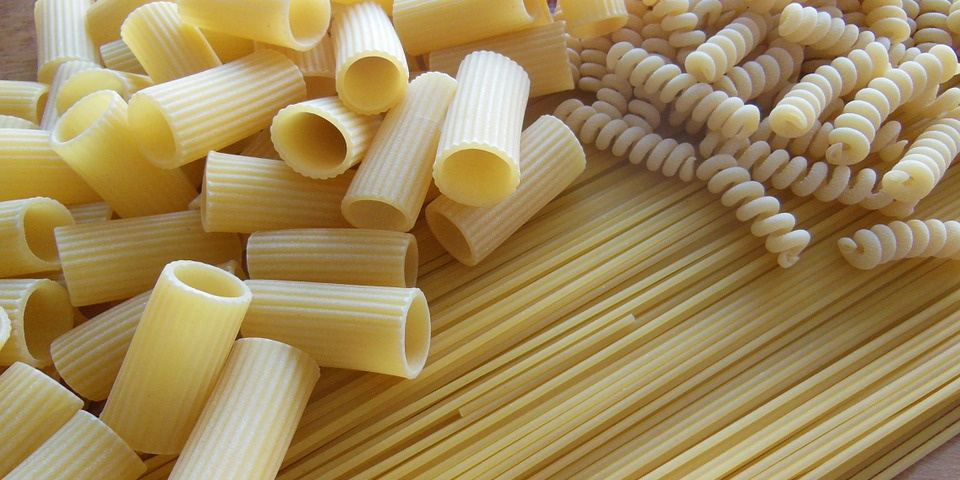 Home » Blogging Palates » More than one thousand types of pasta?

More than one thousand types of pasta?

A peek into the mystery of the Italian obsession for too many shapes of pasta, all with different names and rules

October 15, 2019
10 min.
Paolo B.
M: “Do you want to go out for dinner tonight? I’ve heard about a restaurant where they make the best tonnarelli cacio e pepe”

D: “What are tonnarelli?”

M: “Well, it’s a kind of pasta that is almost like spaghetti alla chitarra”

D: “Why don’t you call them spaghetti alla chitarra, then?”

M: “Well, they are almost like, but not exactly alike”

D: “What’s this obsession you Italians have with creating a thousand different shapes of pasta?”

M: “It is not an obsession, and I don’t think that they are a thousand”


This is one of three conversations that I had recently had with non-Italian friends, and that pushed me to find out how many shapes of pasta are there in Italy. This post is a short trip into the Italian obsession for creating different types of pasta, for naming them in ways that are difficult to pronounce even for Italians, and in creating extremely cheap rules about which type of pasta can go with which sauce, ingredient, mode of cooking... By the way, my friend was right: there may be way more than a thousand types of pasta in Italy.


More than 350 shapes of pasta

If you’re looking for a short answer, here it is: in Italy, there are more than 350 different shapes of pasta. If you’d like me to be more precise, I am afraid that I cannot: even the experts at the Pasta museums that I’d talked with, do not agree on the exact number. In fact, the difficulties to obtain the exact, final number are enormous: traditions sometimes change from one borough to the next one within the same little town; in different places, the same name is given to different shapes but the contrary also happens: different names are given to the same shape; not to mention the fact that new forms of pasta are born somehow frequently, and with time, if the right sauce for them is found, some shapes become accepted as part of the community of pasta shapes. For example, during the twentieth century kinds such as the dischi volanti (meaning UFO) or the radiatori (radiators) were created and they are still around. 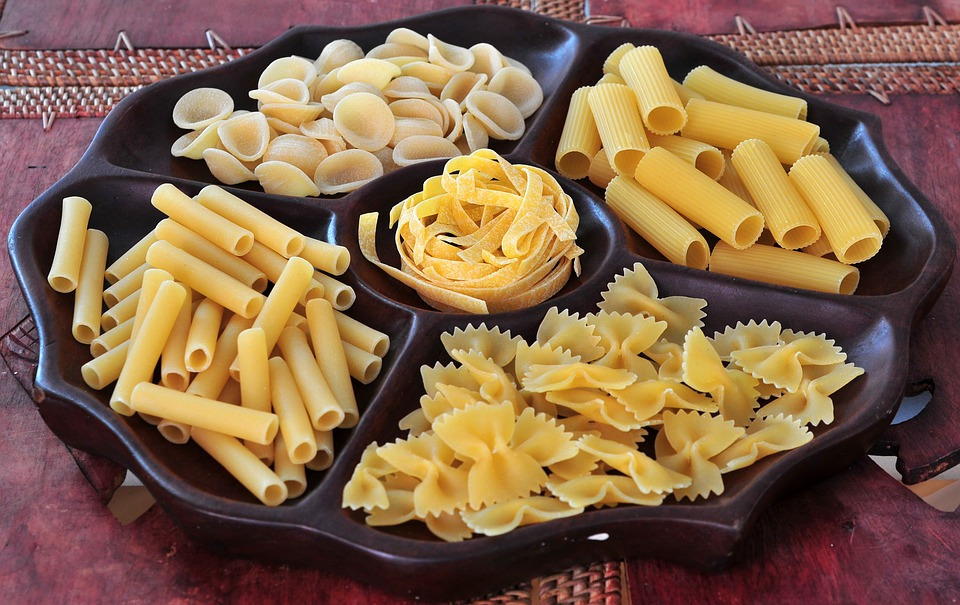 Yet, 350 shapes do not mean only 350 types. In fact, some shapes can be made with different ingredients, as for instance with various types of flour, or adding extra elements like spinaches, tomatoes or squid ink to give the pasta a special flavour and to colour it in different shades of green, red, black… Of course, if two pastas have the same shape but are made with different ingredients we consider them as different types, which implies giving them different names. If on top of that you add the incredible variety of stuffed pastas where the filling makes the difference (pumpkin, meat, cheese, shrimps, fish… you name it!), we easily get beyond 1000 different types of pasta.


…each with its own sauce!

Thick, thin, short, long, hollow, smooth, ridged, stuffed, wavy, made with barley, with potatoes, with carrots… and much much more. We Italians have created a type of pasta that works with every sauce on the face of the earth, and we’re very anal about which combinations are allowed, and which are not. We are also very strict about which ingredients can be associated with which kind of pasta. And we’re usually extremely severe if someone suggests ignoring the traditional rules of association between a pasta and its sauce: the answer is basically always a crescendo of indignation of the kind: “No! No way!! How dare you!!!”. I could continue for a while with this description of how much importance we put on the matter of “pasta types (and what comes with it)”, which may seem trivial to people from other cultures but it’s definitely not here in Italy. But this subject, a.k.a. “the National Rules of Association” between a pasta and its sauce, is one that deserves its own, very long, post. I promise that I will get back to it as soon as possible.


Regional variations and the knowledge of the average Italian

All of this happens also – but not only – because pasta types are strictly associated with the terroir, with traditions, and with local identity. Every other village has at least one traditional type of pasta, and often more than one. We overall agree on most of the rules of associations. For instance, it is common knowledge that the pici are the ideal pasta for a Genoese pesto. Pici are the thick, hand-rolled type that may seem like fat spaghetti but that ARE NOT FAT SPAGHETTI! According to my personal – very much not statistically accurate – research, that consisted in calling up a dozen of friends in different parts of Italy and asking them to list all the kinds of pasta that they know, the average Italian knows about fifty to seventy different shapes of pasta. As impressing as this may seem, this also means that there are about three hundreds shapes that the average Italian does not know. Traditions have it that, in the case that one is about to cook or eat a kind of pasta and/or a type of sauce that (s)he’s not familiar with, there are only two final authorities who can give approval to the action or avoid a major sin: grandma, if it’s a matter of local cuisine, or a friend who lives where the kind of pasta/sauce in question is officially from, better if (s)he has a grandma who can confirm his or her words. As with every rule, this one too has some exceptions. For instance, it does not apply to restaurants that offer innovative matches or reinterpretations of tradition. 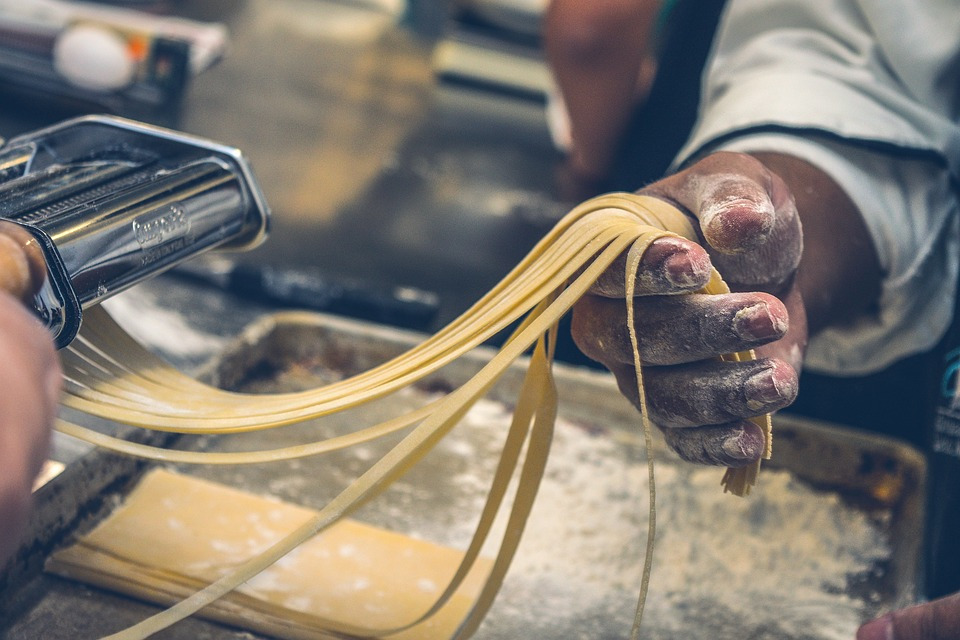 As if the differences from town to town were not enough, pasta fashion has evolved and changed throughout the centuries. Italy’s history is as rich, colourful, and fascinating as the amazing types of pasta that are prepared there. And of course, there are plenty of people, including ourselves, who enjoy searching ancient books to recreate recipes that are not prepared anymore. In fact, for example, in the past centuries, due to the higher cost of wheat flour, it was easy to find pasta made with … well, I will leave this saucy story for another post! 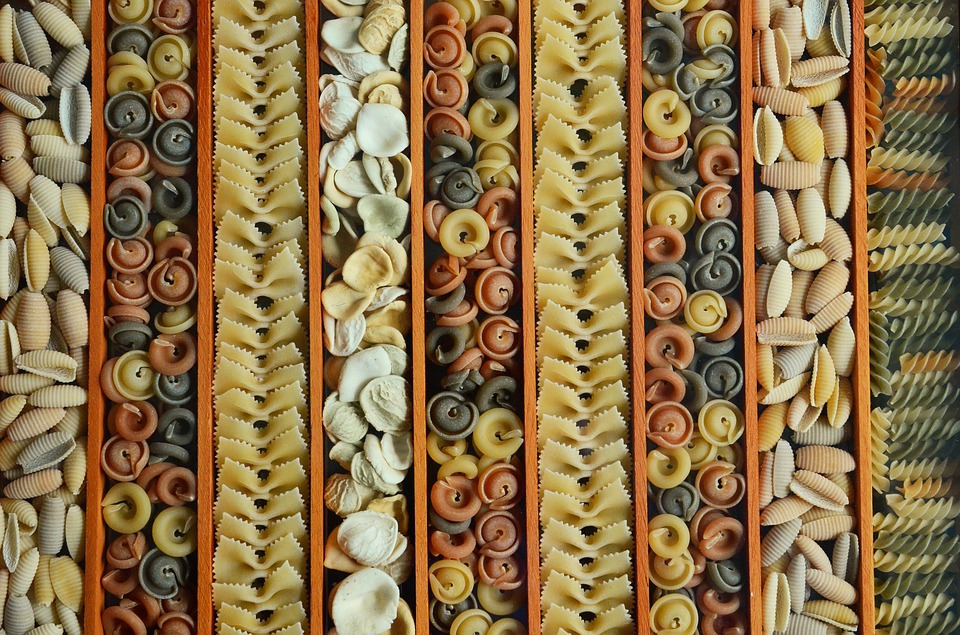 Pasta is big business for Italians

More could be said about this incredibly interesting topic – at least, incredibly interesting for me. And I promise to get back on the subject. But, with the intention of showing that there some truth in the little story that I’ve just told, it may be insightful to look at the facts from another perspective. Indeed, if you want to know if something is really important in a culture, having a look at the local economy can give some important clues. And, as it is, pasta is big business for Italians. In fact, Italy produces around 4 million tons of pasta per year and (unsurprisingly) is the country with the highest consumption per capita in the world. The average Italian eats more than 12 kilos (25 pounds) of pasta per year. We are closely followed by the Germans, then come the French, the British, the Americans, and the Japanese. 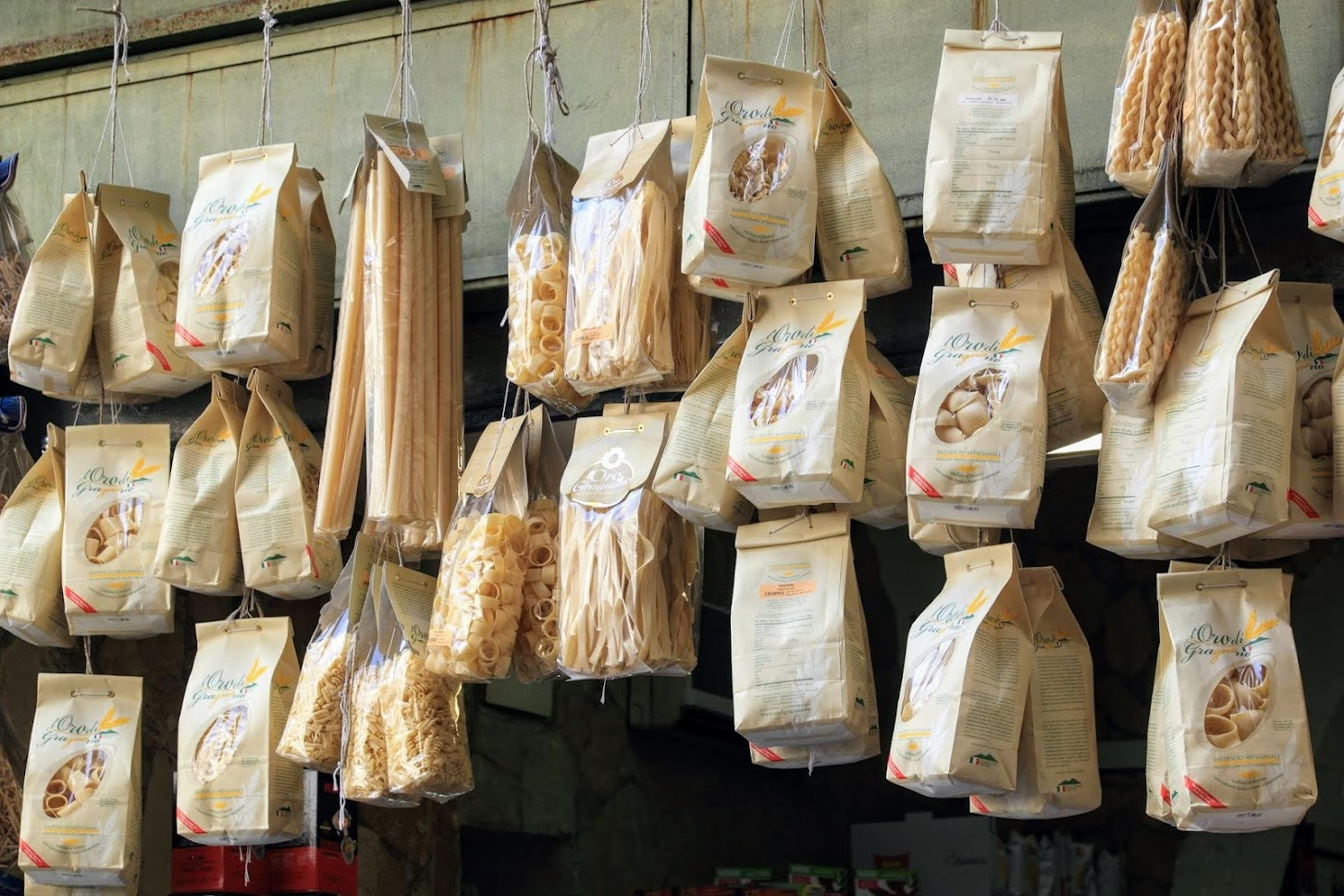