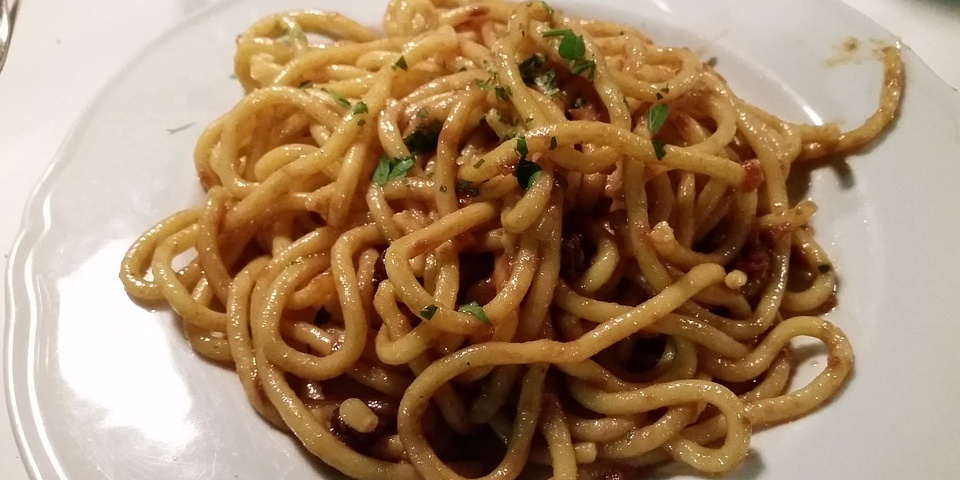 An incredible dish from Venice working-class tradition
September 24, 2021
7 min.
Ernesto H.
Onions, sardines and oil to season spaghetti: that's all. The “bigoli in salsa” are a typical main dish of Venice region which, according to tradition, was eaten during the "lean" days, those during which, according to the Catholic church, one was not supposed to eat meat, such as Christmas Eve or Good Friday. They are so deeply rooted in the territory that here, to say "go eat", you can say "go to bigoli"! A dish that comes from the working class. A dish poor in the choice of ingredients but very rich in taste. If you stop by Venice or its surrounding area, make sure to try them!


The origins of bigoli

As often happens, different stories are told about the origin of bigoli. Some argue that it was a Paduan pasta maker, Messer Abbondanza, who invented a particular device in the early 1600s that allowed the production of different types of long pasta, including a variety of large rough spaghetti which, according to the buyers, resembled long caterpillars, called bigàt in Venetian dialect, from which it takes its name. Others argue that the term 'bigolo' comes from the name of the typical curved stick that in past times was used by the laborers in the service of pasta masters to transport water or flour. Well, the historical traces of this pasta date before the fifteenth century. Some stories relate that during one of the wars that the Serenissima Republic waged against the Turks, feeling guilty for the sinking of ships carrying the precious durum wheat flour, a pasta maker in charge of provisioning came up with the idea of ​​using the saveable flour, making the large spaghetti.
Whatever the true story is, we are certain that in the original recipe bigoli are prepared with soft-wheat flour, water and salt. The main feature of this large spaghetti is its roughness, which allows it to retain sauces and condiments.
At the end of the 19th century, with the spread of homemade pasta machines, almost every family began to make them at home. It was customary to prepare abundant quantities useful for the whole week: as soon as they were prepared, the bigoli were put to dry on suspended sticks. Even today, many Venetian families keep a bigolaro stick in their home as a family heirloom. A dish that represents the territory, whose tradition is still very much alive: in almost all Venetian and inland trattorias, in fact, they are easily found on the everyday menu.
Today there are different varieties of bigoli: on top of the original version, one can find bigoli made with durum wheat flour, with eggs, with mixed flours, coloured bigoli and so on.

But let's go back to our dish: bigoli “in sauce”. The topping may have originated thanks to the influence of the Jewish community in town. Nowadays, bigoli are almost no longer made at home. Therefore, from the beginning of the 2000s, a brotherhood of “recovery of the tradition of homemade bigolo” was born. Its members try to pass on the tradition of the bigolaro torcio, the ancient tool used to make them, in order not to lose this splendid tradition and all the history and flavours that it brings with it.
Usually, the term 'sauce' suggests tomato, but for Venetians the sauce is based on oil, onions and sardines or anchovies: to obtain a perfect sauce you need to find the right onions, sweet and tender: the ideal ones are said to be the white onions of Chioggia. The ingredients must be cooked very slowly in extra virgin olive oil, until they melt and mix forming a sauce. And as any traditional dish that boasts so much history, its reinterpretations in a modern key are abundant, and sometimes also delicious: from the addition of breadcrumbs sautéed in extra virgin olive oil, to chopped parsley, to the sprinkling of black pepper, to the creaming of the pasta with raw butter…
A dish that is very easy to prepare, so you just have to taste it!
Other articles by
Ernesto H.
Other news categories:
Food Stories
Places
Ingredients
Dishes
To drink
The WalkingPalates library
Popular Tags:
meat wine tradition italy naples cheese rome recipes venice abruzzo piedmont chocolate milan food cookbook
Keep up with our latest news and experiences!
Subscribe to our newsletter!
Latest news:
Latest News