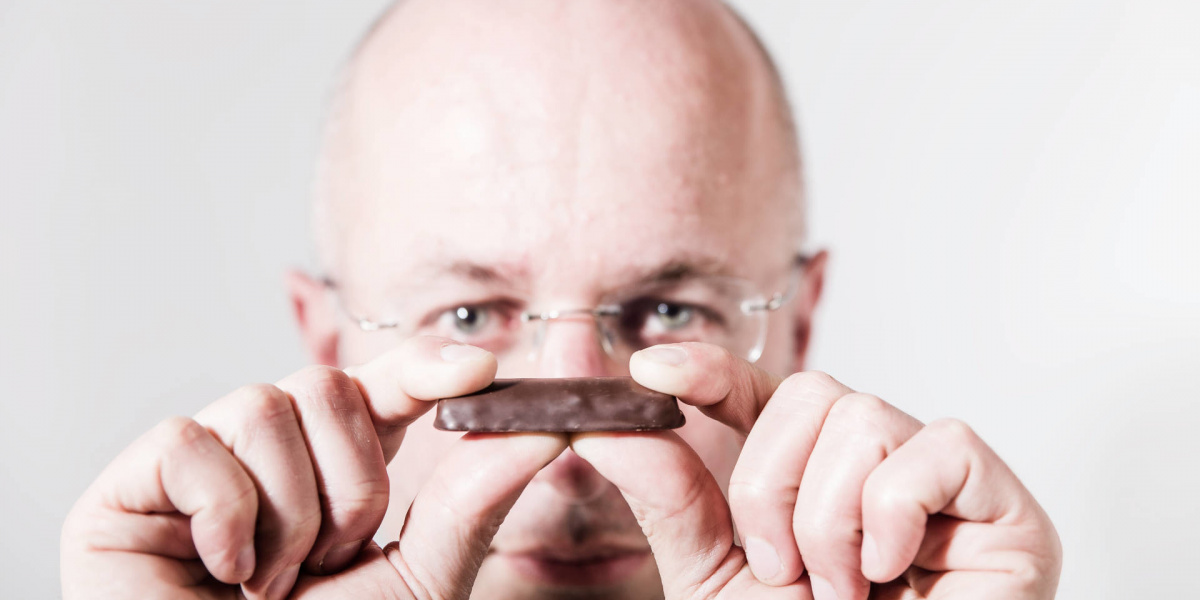 From a passionate chocolatier
October 01, 2018
12 min.
Antonio & Paolo
Antonio Autore, one of the two founding members of Walking Palates, is also an artisan chocolatier who produces chocolate of the highest quality, including the world famous croccantino of San Marco dei Cavoti, his city of origin. As an expert on the subject, we invited Antonio to tell us all about chocolate and this is what we learned.

The leading consumers of chocolate worldwide are the United States and Europe. However, there has been a significant rise in the Asian market, namely in China and Japan (source, ICCO). The world market value exceeds 120 billion dollars and, per Euromonitor reports, 4 billion tons per year are sold. Yet despite the breadth of its sale and consumption, it seems that little is understood about the journey endured by the humble cocoa bean before it settles on our supermarket and candy store shelves in the form of chocolate. 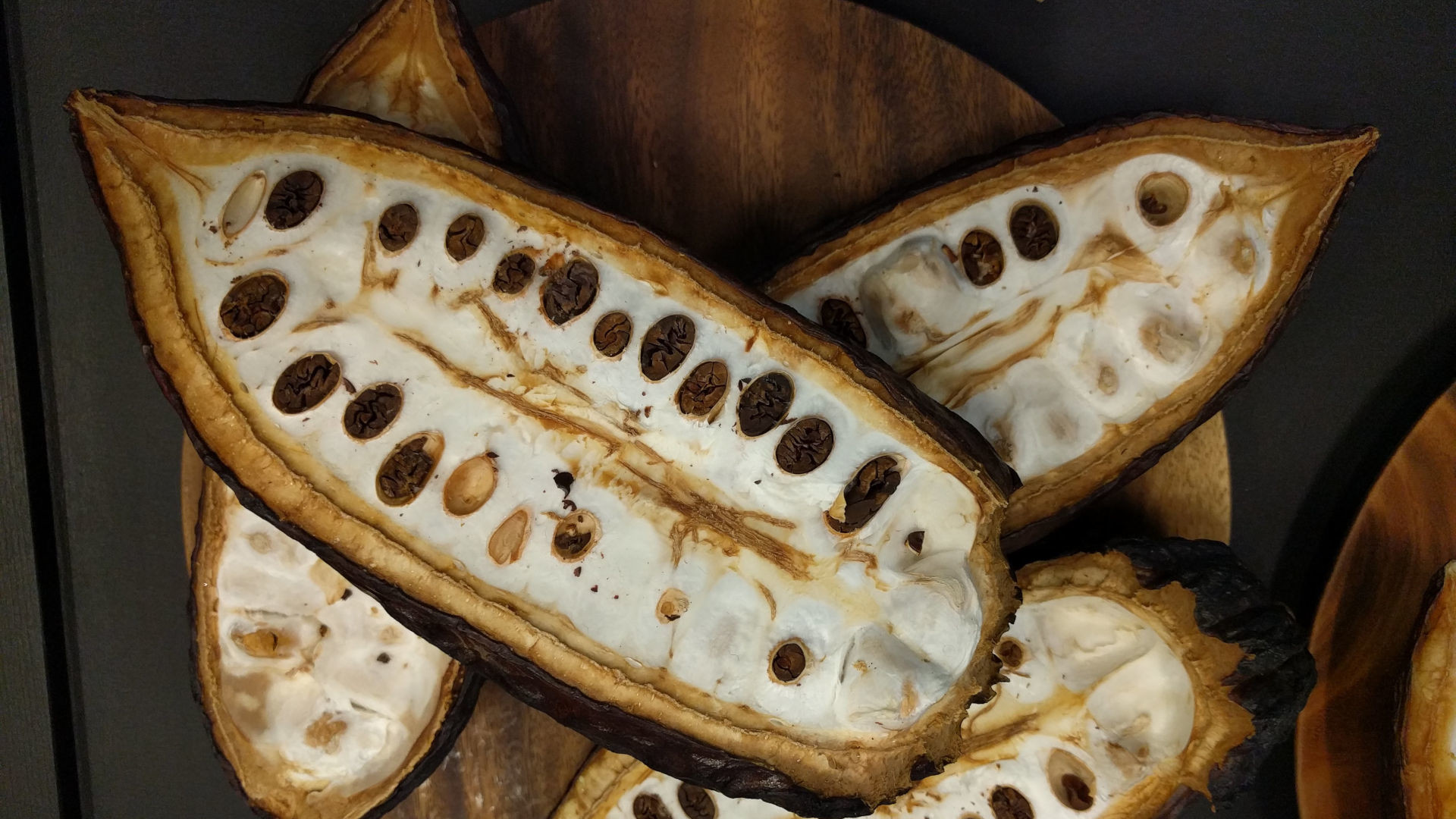 Our adventure begins in Central America, where the cacao plant and its name originate from ancient, pre-Columbian cultures.
The word cacao is pre-Columbian, possibly Mayan, as evidenced by the discovery of a fifth-century vase in a Guatemalan tomb. This vessel, which houses the remnants of a fifteen-hundred-year-old cacao beverage, bears an inscription where the word kakaw remains legible.
The word “chocolate” traces its roots back to a language related to Aztec – or maybe Aztec itself, and to the word cacahuatl.

Conversely, the plant’s scientific name arose from Greek in modern times. Theobroma cacao, literally, “cacao, food of the gods” (from the Greek, theos, god, and bròma, food) was aptly chosen as a reminder of the sacred importance and the ritual utility that cacao had in pre-Columbian cultures, among whom the consumption of cacao was reserved for a select few. As the food of the gods, its use was not taken lightly. Only kings, noblemen, and warriors were allowed to consume it, and only on special occasions, such as the end of ceremonial feasts or during rituals. Within some populations, its consumption was even prohibited to the common people under penalty of death! While cacao bore a fascinating significance as a holy draught, its use goes beyond the scope of consumption and into commerce.
The Aztecs designated the best quality beans as currency, while those of lesser quality were used to make beverages. To concoct the sacred brew, the Aztecs roasted the beans in terracotta pots, ground them with tools called metate, and heated them over a flame. 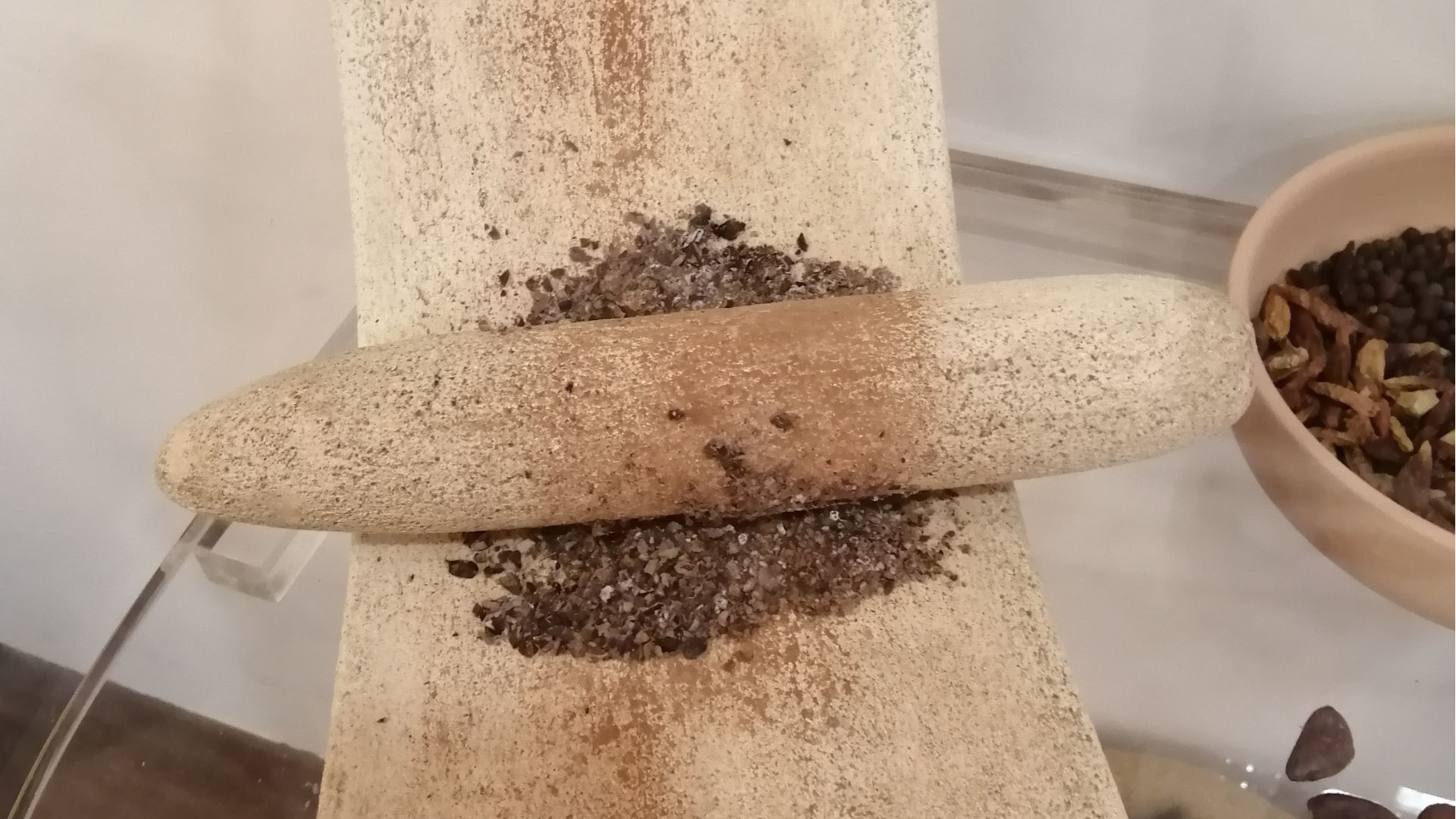 This would produce a paste that they would thin with water and season with different ingredients, such as vanilla, pepper, chilis, and exotic fruits to form a frothy, ceremonial ambrosia. Could there be some validity to its exalted status among the ancients? Does Theobroma live up to her name? Maybe it’s not magic, just medicine.
In fact, research from the University of Cambridge (UK) published in the British Medical Journal reveals that the consumption of chocolate could be associated with a reduced susceptibility to the risk of cardiovascular disorders.
Researchers carried out a systematic review of seven studies using data related to 114,00 patents, and they showed evidence that people who consume more chocolate during their lives present a lower risk in developing cardiovascular disease compared to those who ingest smaller quantities. More precisely, the study refers to a daily portion of chocolate of about 7.5 grams (0,26 oz) that could reduce the risk of heart attack (37%), stroke (29%), or diabetes (31%) by about one third. And it’s not just dark and milk chocolate—the studies also took into consideration cocoa drinks and other chocolate-based desserts.

Yet before self-medicating with a box of truffles, take note.
Although the analysis conducted suggests a certain benefit from the consumption of chocolate, the results should be interpreted with great care. One of the principle authors of the study, Dr. Oscar Franco of the Department of Health and Primary Care, specified that chocolate could certainly be useful to the body, but only if consumed in moderation.
As a plant, cacao is somewhat less fantastical than its history and etymology, but no less fascinating to explore. Theobroma cacao is a type of evergreen tree that has been known to survive for up to forty years.
There are three plant varieties that are distinguished by their shape, aroma, and value—ranging from the majestic Criollo, to the most widespread and common Forastero, and the Trinitario in between, born from the hybridization of the former two. Five meters (15 ft) is the average height for plantation specimen, but the cacao plant can grow up to ten meters (30 ft) tall, when left to her own devices. 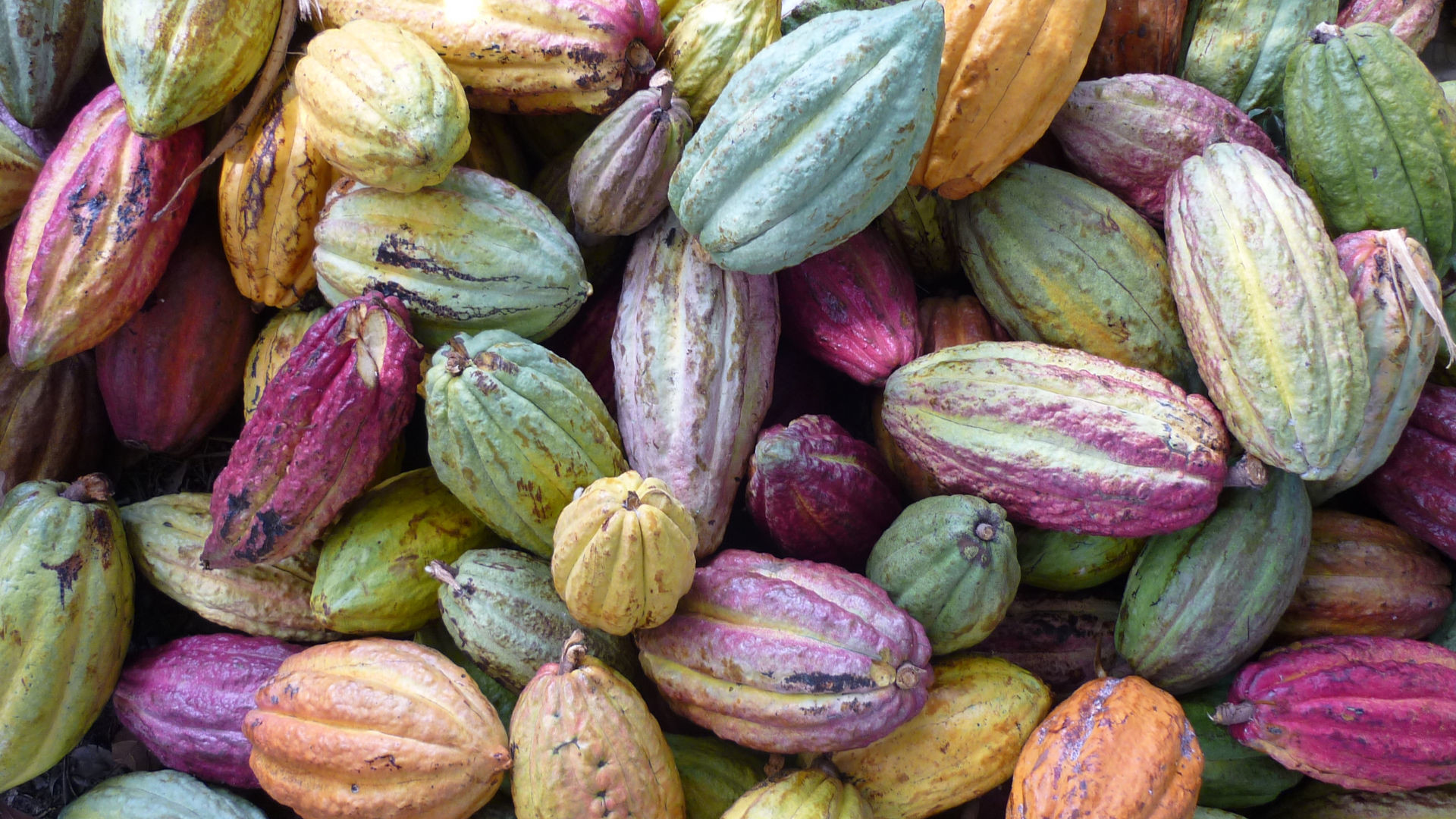 Although chocolate is consumed all over the world, cacao is only cultivated on about 69,000 km² (27 000 miles²), or a surface smaller than that of Ireland! (FAO, 2017) Its growth and harvest is localized in the equatorial belt, primarily in Africa, with Asia and South America contributing to the cacao cause as well. These trees thrive in an altitude around 400 meters above sea level, but they can be found at lower altitudes.
When it comes to temperature, Theobroma prefers between 20° and 30° C (68° and 86° F). Of the numerous flowers blossoming on the plant only a small percentage will graduate to cacao pods.  Yellow or reddish in color, each pod contains about 30 to 40 seeds (widely known as “beans”). These seeds are arranged in five rows around a central placenta and housed by a sweet, gooey pulp. The cacao pods are hand-picked, then opened. From here, the seeds and pulp are extracted and left to rest for 5-7 days, during which they undergo a series of fermentations: alcoholic, lactic, and acetic. 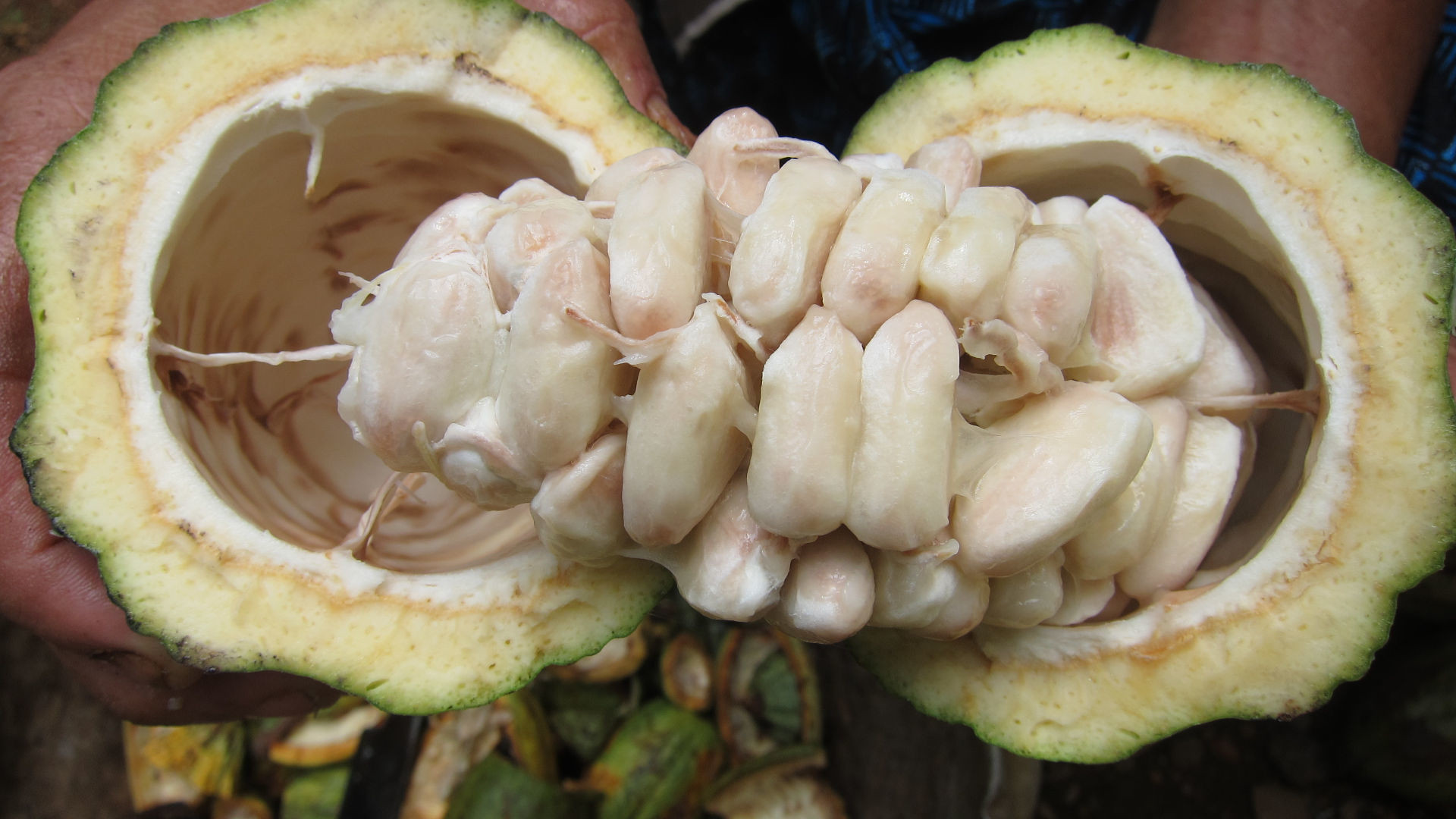 This fermentation process, rather than artificial dyes, is what gives red chocolate its characteristic color.
The pods then endure a drying phase lasting one to two weeks. This not only halts the fermentation process, but is also instrumental in preserving the beans for extended periods. The next steps are “polishing,” which involves sifting out foreign materials to yield the prized cacao, and pre-roasting. Today, the pre-roasting entails vigorous exposure to infrared radiation for a few blistering minutes at around 400° C (about 752° F). Then, comes the grinding of the beans and the discarding of the skins. The acquired grind is first bathed in water (alkalization) and then toasted for about 30 minutes with waves of 100°-120° C heat (212°-248° F). This serves to coax out some of the beans’ shyer, natural aromas.
Next, the beans are run through a mill to produce a cacao paste, which is pressed to yield two crucial components: cocoa butter (fat portion) and cocoa mass (dry portion). The former is put through a process of deodorization, which renders a more pleasant flavor, while the latter dry mass is shredded into fine cocoa powder.

At long last, the moment we’ve all been waiting for, the cacao is ready to be transformed into chocolate! But first, a brief history. As previously noted, cacao has been consumed in some form or another for centuries. However, it is not until the nineteenth century that chocolate begins to appear in solid form. How ever did this happen and to whom do we owe the tremendous debt of gratitude for producing this incredible substance? Why, Casparus van Houten and Francis Fry, Jr! It was Van Houton who first employed the hydraulic press to extract cocoa butter from cacao paste and Fry who first united cocoa powder and cocoa butter in the perfect ratios to yield solid chocolate. There, the answer to the mystery of solid chocolate: two basic ingredients (cocoa butter and cocoa powder) brought together in precise ratios and subjected to intense pressure.
The selection and the combination of the ingredients follow from the phases of refining and conching, which pertains to the particular variety that one intends to create, be it dark, milk, or white chocolate. Now we arrive at the precarious moment in which the chocolate undergoes an intriguing thermal feat—tempering—where it initially cools at 26° to 28° (28°-82° F) and then melts at 29° to 30° C (84°-86° F). This is necessary for granting the classic shiny appearance and sufficient shelf-life. At this point, the chocolate can be moulded into various shapes and solidified as it cools. The release from the moulds and the subsequent packaging and distribution conclude this gripping journey of chocolate processing. 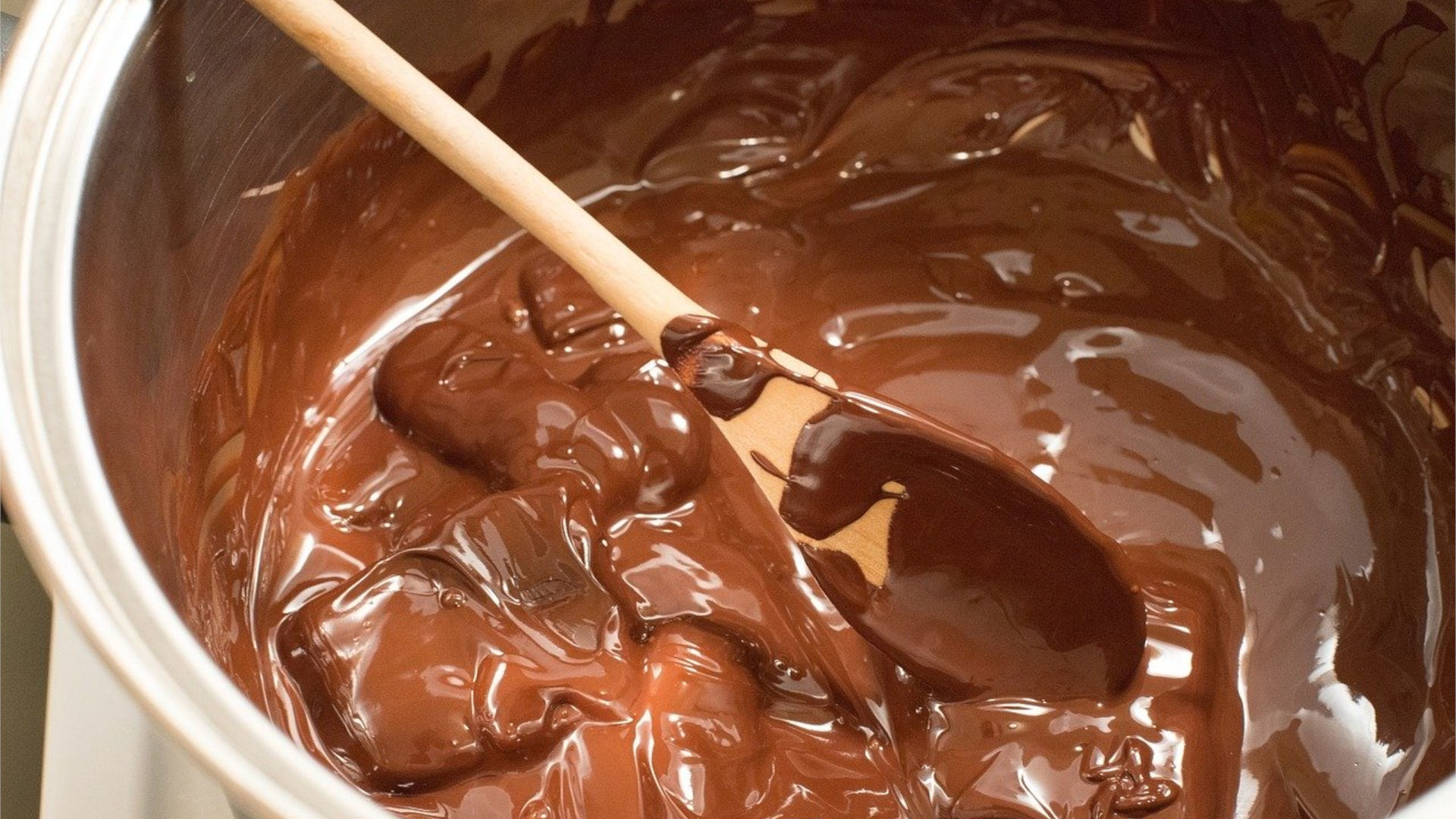 We can tell you even more about cacao and chocolate. We would like, for example, to write about the sensory qualities of the various types of cacao.
Antonio Autore is actually an expert “chocolate sommelier,” and for this reason, we have invited Antonio to return to tell us even more about the food of the gods. We hope to come back soon to share even more of his knowledge and expertise with you. For now, if you’re interested in learning more, we encourage you to participate in the seminars that are regularly held near the Autore estate.
Tags:
chocolate about us cocoa foodartisan production
Other articles by
Antonio & Paolo
Other news categories:
Food Stories
Places
Ingredients
Dishes
To drink
The WalkingPalates library
Popular Tags:
naples recipes milan meat chocolate wine cheese cookbook abruzzo italy venice piedmont tradition food rome
Keep up with our latest news and experiences!
Subscribe to our newsletter!
Latest news:
Latest News