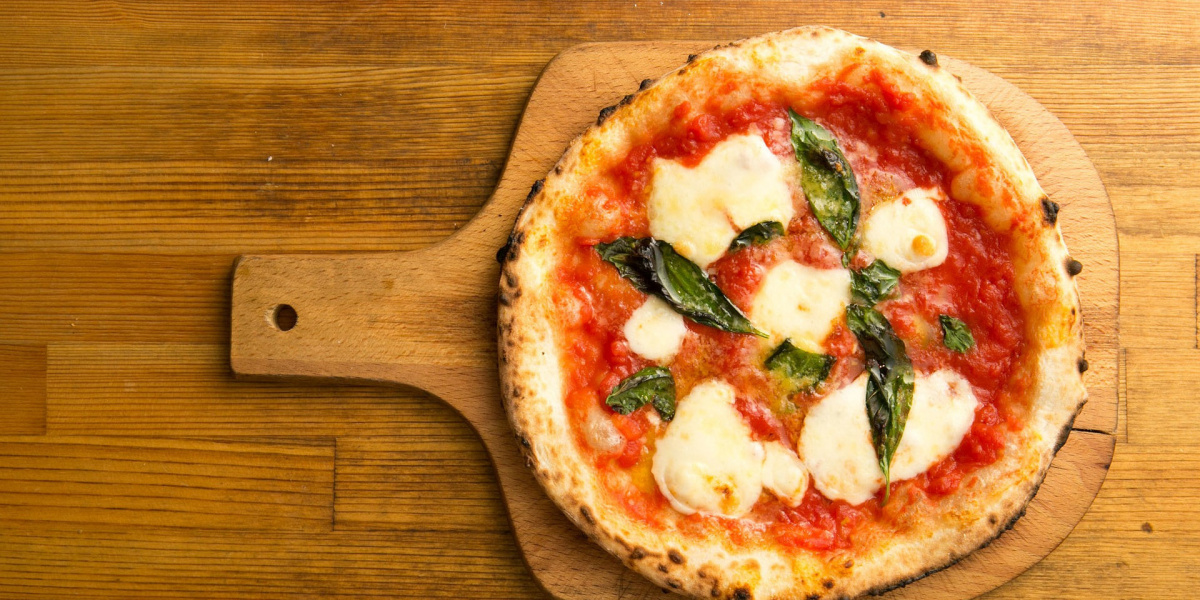 One country, many Pizzas

A Guide to Italy’s Pizza - regional styles
January 15, 2019
13 min.
Laopo T.
It was invented in Italy – at least in the form that we know it today. The world embraced it, loved it and changed it, adapting it to regional taste, enriching it with local ingredients… and the debate has raged on ever since: what is the original Pizza from Italy? Now most people, including myself, would point to the classic wood-fired, tomato, basil and mozzarella version that hails from Naples as the original and authentic. Many Italians would agree, too. In Naples you’ll find the University of pizza, some of the most renowned pizzaioli and a popular cult of Pizza that makes almost every Neapolitan an expert of dough, crust, toppings.

Nonetheless, there are many regional pizza styles in Italy that many of us are proud of and the main topic, in Italy, is not “where is Pizza originally from” but “which one is the tastier”. Now, when it comes to “which Pizza is the best” the debate could keep going for a thousand years and get very heated.

If you are brave enough, try arguing that the Neapolitan pizza is better than the “pizza al taglio” Roman style with a local while (s)he’s ordering a slice of focaccia style pizza from his/her favourite hole in the wall and you might go back to your hotel wearing one! Well in this article we’ll take a look at some of the different varieties of this beloved dish. If you’re in Italy, make sure to try the local types of pizza: I promise that you’ll love it! And if you try enough of them, you may have enough to keep the conversation going for hours with your Italian friends (everybody knows that we Italians love to talk about food and about the slightest nuances of recipes when we’re eating!). 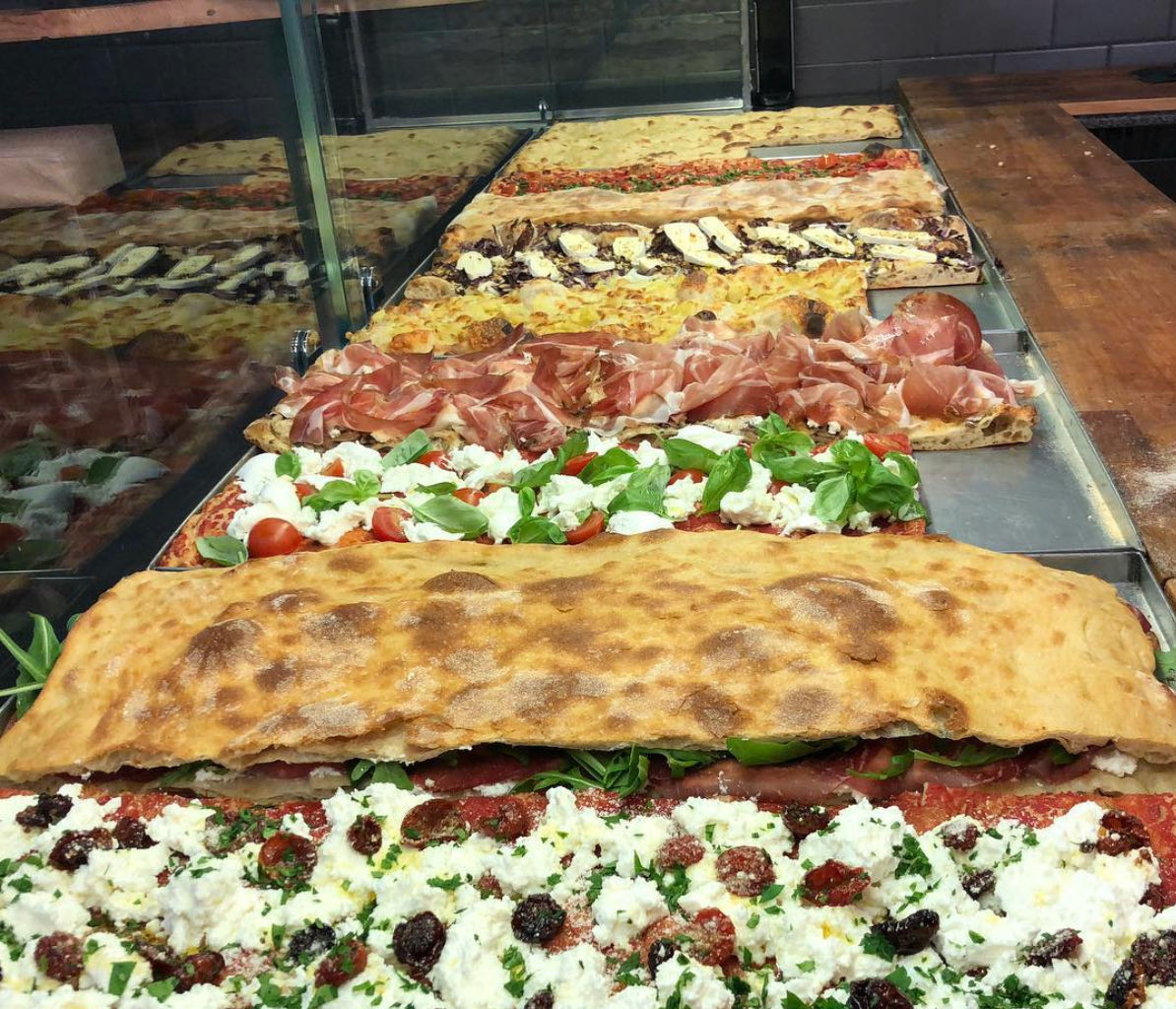 Pizza al taglio, literally “pizza by the cut/slice” is how they do things in Italy’s central areas, from Rome to Abruzzo region. This style of Italy’s Pizza usually comes in rectangular slices with a relatively thick, focaccia-like base. It is cooked in small electric ovens and usually has a slightly crunchy base and a softer top. The dough is spread out in a long square (or rectangular) form and once out of the oven it is cut in smaller square/rectangular that are sold by the piece or by weight.

It comes with an incredible array of different toppings from aubergine to eggplants, from mushrooms to shrimps, prosciutto ham, rocket (rucola), olives, sausages, all possible kinds of cheese, beef brisket and much much more. “Pizzeria al taglio” are in fact known in central Italy for experimenting with toppings and many of us prefer to go in a specific one instead of another because of the types of topping that can be found only there. A wildly popular pizza in Rome and in central Italy is the pizza bianca. Simply meaning “white pizza”, this type of pizza al taglio can often be bought also at bakeries. A white pizza is plain, only topped with with olive oil and salt, sometimes with a little bit of rosemary, and can be eaten plain (don’t be fooled by its humble appearance: it’s incredibly rich in flavour!) or stuffed with mortadella ham or mozzarella. Pizza al taglio is a sort of central Italy fast food: enjoyed for a quick bite with friends or for a light lunch, it can be found at every corner, it’s pretty cheap and so so so so good!

If you go out for dinner in a Pizzeria don’t expect a pizza “al taglio”: a big, round pizza is what you are served when sitting at a table and order from a menu. Usually cooked in wood-fired oven, the Roman type is thinner than in other parts of Italy (and definitely too thin if you like the Neapolitan style), often with a crispy crust. It comes with a great varieties of toppings: the menus at Roman pizzerias are usually pages-long and may inspire you to try something new. By the way: no sharing allowed! Remember that round pizzas are expected to be eaten individually.

Pinsa romana
Most of us in Italy don’t call it a pizza, although it looks very much like it and it tastes as delicious. The lover of Pinsa Romana will tell you that it comes straight from an Ancient Roman recipe… but we won’t go there today. The preparation of a Pinsa is pretty different than the one for pizza because it mixes different kinds of flours (not only wheat, but also at least two other kinds among rice, soy or millet flour) and because it takes longer to ferment. It’s oval shaped and is very easy to digest. 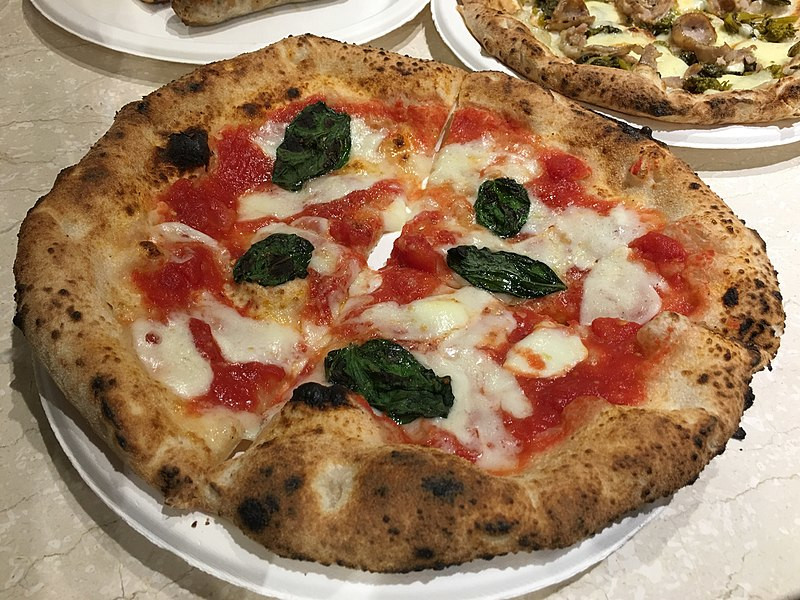 A true Neapolitan pizza, as my Neapolitan friend Gennaro would say, is not a dish, it is a masterpiece. In 2017 the art of the Neapolitan pizzaiolo has been enlisted by the Unesco as an Intangible Cultural Heritage of Humanity. These are two, out of a thousand, reasons why we won’t talk here about the technical details, beside noting that a Neapolitan pizza is kneaded by hand and cooked in a brick, wood-fire oven for no more than 90 seconds. Ah, the unmistakably puffed up crust, slightly charred, the Neapolitan tomato sauce, the mozzarella from Caserta… It can and must be tasted only in Neaples. 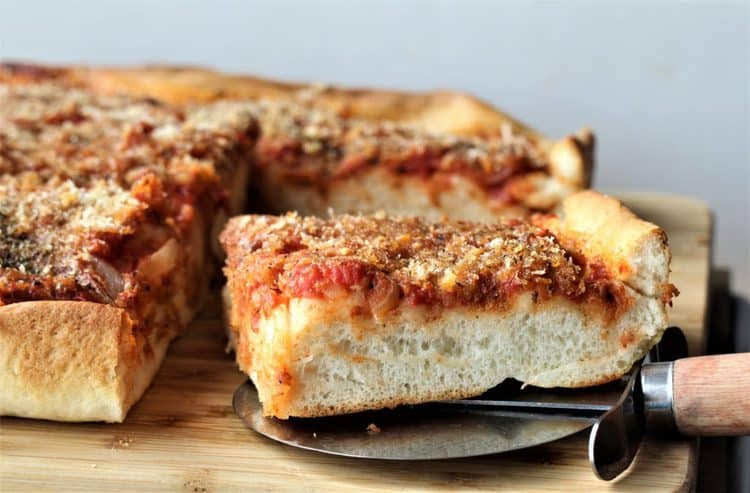 The sfincione is a traditional Sicilian pizza originating from the Palermo region. It was traditionally prepared at Christmas but you can now find it year round at any Palermitan market as it has become the quintessential Sicilian street food dish. It comes thick, doughy and rectangular in shape. It is topped with anchovies, tomatoes and cheese. The cheeses used may be Caciocavallo, which is a strong tasting local sheep’s cheese or Ragusano, made with whole milk from Modicana breed of cows. In both cases, brace for a storm of very strong tastes! 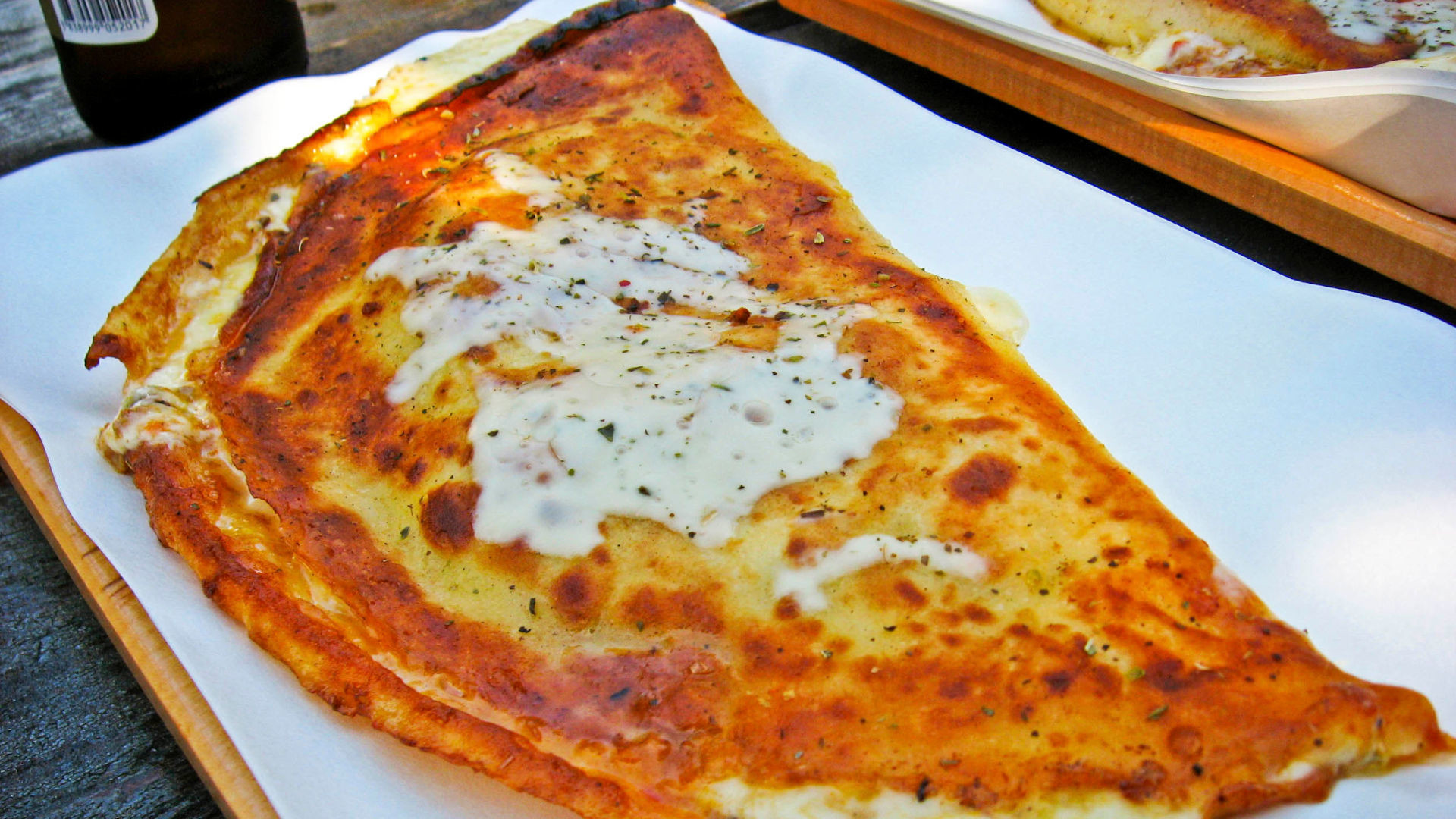 The calzone can be found all over Italy, and probably originated in Neaples. This folded pizza is pinched and crimped like an old English pasty before being cooked in the oven. In Naples the Calzone fritto is a classic: the calzone is deep fried instead that cooked in the oven. One of the favourites for the residents of Italy’s fashion capital is a small, pocket sized version of it called panzerotto. It’s traditionally stuffed with cheese and ham or the finest Salami Milano before being deep fried to crispy perfection, although today it comes with a great variety of fillings. There’s a joke among Italians that the reason Milan’s fashionistas eat their pizza this way is that there’s less chance of them spilling any of the toppings on their expensive designer clothes!

Pizza al tegamino translates to ‘pizza in the pan’ and if you listen to locals it could well be the oldest ‘deep pan’ pizza in the world, though it probably dates back only to the early 1920’s. The pizza dough is stretched in an olive oil soaked pan, topped with tomato and left to rise a second time before being topped with mozzarella and oregano before heading into a brick or electric oven for it’s half baked, half fried finish. The result is a fluffy yet crispy masterpiece that sits halfway between a focaccia and a pizza. 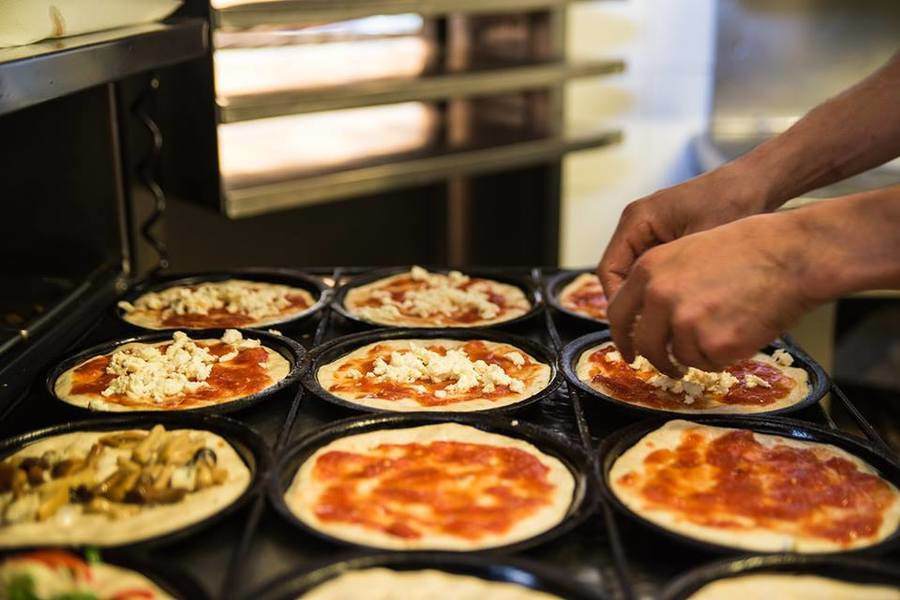 The pizzetta tonda (small round pizza) is another form of pizza in the pan: the all time favourite of the inhabitants of the Adriatic costs of central Italy, where it is often paired with a beer and is the perfect snack or light lunch for a summer days on the beach. Fluffy but crunchy around the edge, rich in olive oil and shamefully cheap, it comes with a great variety of toppings. 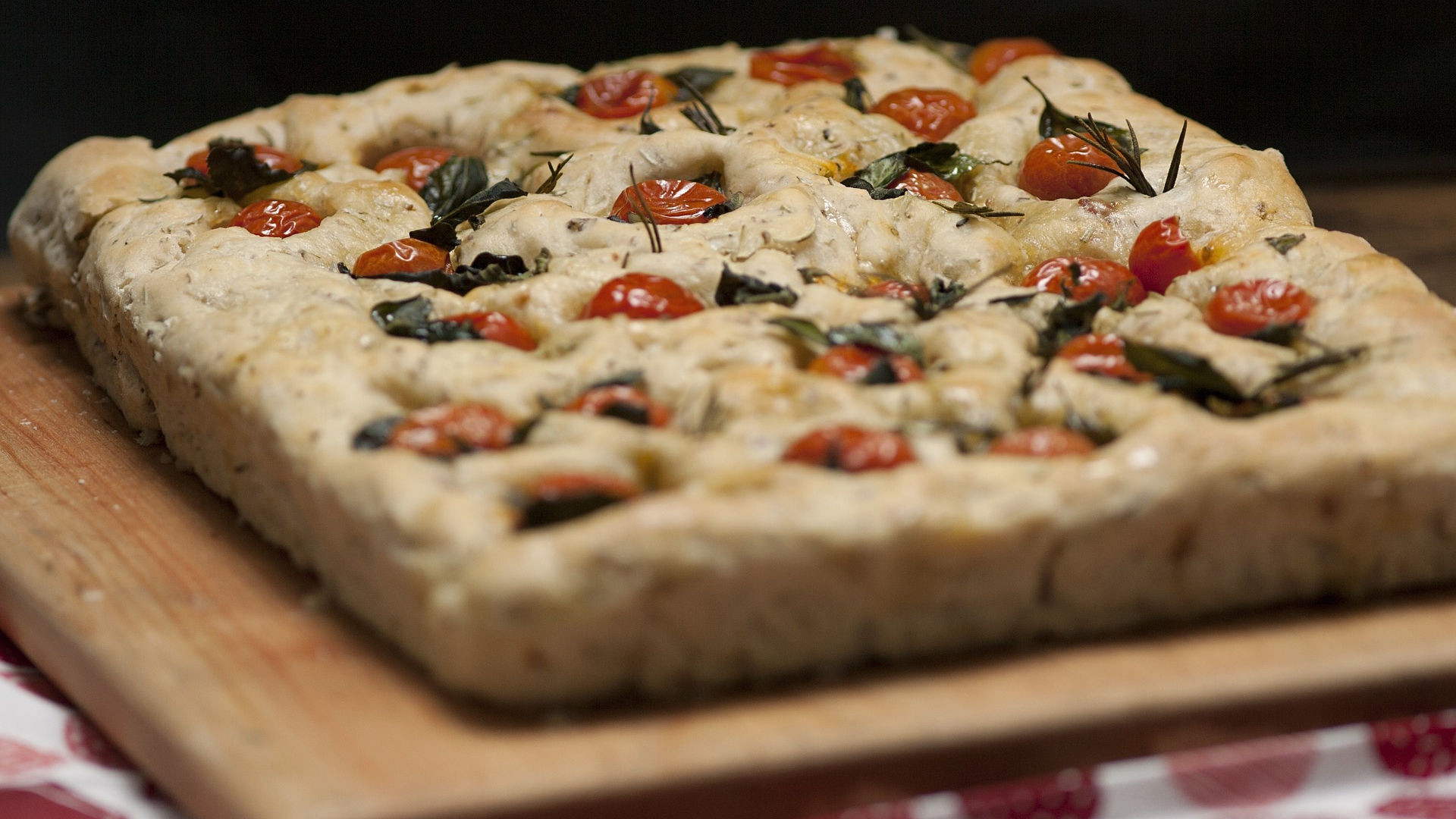 This crescent-shaped region in northwest Italy is best known internationally for being the birthplace of Pesto alla Genovese that’s loved the world over. Liguria does also produce more than one kind of excellent pizza-related dishes: the Sardenaira, aka Pizza all’Andrea (Pizza in Andrew’s style); the focaccia genovese and the focaccia di Recco and more. Confused? People from Liguria are too, for sure. Seardenaira is a recipe typical of the city of Sanremo. It is topped with tomato sauce, local “taggiasche” olives and anchovies. To add confusion by some it’s called Sanremo-style pizza. It’s delicious so we will include it all the same! Focaccia genovese is a kind of pizza-bread typical of Genoa that is painted with a mix of olive oil, water and salt before being cooked. If you read the Italian version of the Wikipedia page dedicated to the focaccia genovese – clearly written by a local – you will find out that it can be traced back to the Phoenicians: way before the Romans but also before the Greeks! Meaning older than Neaples… And of course, we won’t go there, but we promise to write about the history of pizza in another post! Focaccia di Recco is a white, soft, thin pizza-bread filled with exquisite cheese of Recco, and can only be found in this little town.

Innovations
If you want to try something unique, there’s a whole world to discover. We promise to get back on this subject too, as soon as possible! For the time being, we’ll just mention that some pizzaioli in Naples are making their dough using sea water; that other pizzaioli in Rome are preparing a Pizza nera (black pizza) mixing flour with vegetable charcoal and that… well, stay tuned for more about innovations in pizza making!
Tags:
pizza roma naples milan liguria history of pizza pizza styles
Other articles by
Laopo T.
Other news categories:
Food Stories
Places
Ingredients
Dishes
To drink
Best of...
Popular Tags:
tradition walkingpalates venice rome naples chocolate history wine piedmont carbonara food about us sommelier milan food tour
Keep up with our latest news and experiences!
Subscribe to our newsletter!
Latest news:
Latest News